how to make your own pet prayer rock 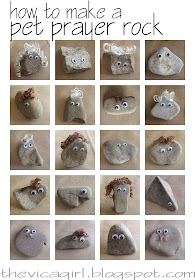 Hey guys.  So, a couple of weeks ago I was asked to give the lesson in the Gospel Doctrine class at church.  I gladly did it.  It was on prayer, and since we do handouts, I decided to make some pet prayer rocks.  And man, they came out better than I thought they would.  They also were a hit at church, everyone loved them.  The girls thought they were cute, and the guys were playing with them with each other during class.  Oh, and did I mention this was a young single adult ward?  Yeah... so they are good for all ages.  They are super easy, and I bet you can figure it out on your own, but I'll let you know what I did.

The concept of a prayer rock is pretty easy.  You put it on your pillow so you remember to say your prayers at night. Then during the night it lives on the floor so you stub you toe and remember to say it in the morning.  I actually just have mine on my nightstand.  I thought the bathroom would be a good place for one to live.  Or oddly enough I say my prayers in the car before I leave the house, so my dashboard would also be a good choice.  (It already has a neopet there, so I don't think I'll put one there.)

Step 1: Find rocks.  My family grows rocks, so we had plenty in the backyard.  Granted, after nearly 30 years, they are starting to not grow anymore, so maybe there is some sort of luck.

Step 2: Wash rocks.  I washed mine in the kitchen sink with some dish soap.  Classy, I know, but it got them clean.  I would guess you could just do it in the backyard with the hose, but it was cold out... 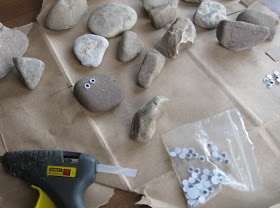 Step 3: Gather supplies.  You'd be amazed at the things I have in my basement, I know I am from time to time.  I gathered up some googly eyes in a variety of sizes, love those things, and some curly doll hair, as well as my glue gun, and a paper bag so I didn't ruin the kitchen table.  (In architecture school, we didn't care if we got glue on the tables, so I have a bad habit of being very messy with my glue gun.)

Step 4: Glue on eyes.  I would move my rocks around to figure out the best place for their eyes.  I tried to make it so that they could stand.  But, I noticed that even when I passed them out, some people saw their rock in a different way than I did, and I was fine with that.  It was at this step that they all started to get personalities.  Who would have thought?

Step 5: Glue on hair.  I think I had too much fun during this step.  Some I might have gone overboard with the hair, but they were so cute.  The ones with hair seemed to be more popular, and for the most part were much cuter.  Some got short hair, some got long hair, some got mustaches.  Yep, to much fun. 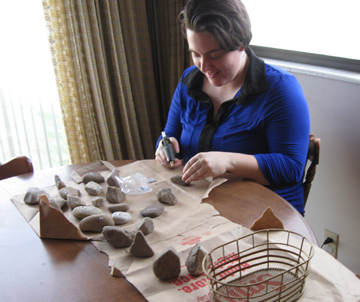 Step 6: Photograph for proof you really did the work yourself and didn't outsource.  :)

I really hope you enjoyed my rocks.  I did.  I loved everyone of them, and it was hard to say goodbye.  That is why I took so many pictures, so that I could remember them after they were gone.  When I was driving to church, I found myself driving super slow to protect the little guys.  And yes, the irony that I was making sure rocks didn't get hurt was not lost on me.  Now, go and make some of your own! 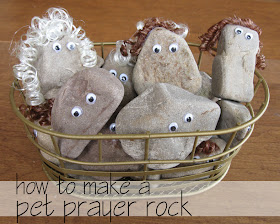